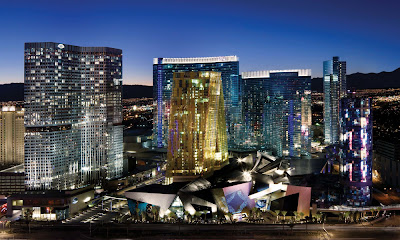 Grand Opening Day and Gala Party Highlighted by Rooftop Fireworks Finale LAS VEGAS – (NYSE:MGM) – Under a canopy of fireworks illuminating the night sky, ARIA Resort & Casino opened its doors last night and welcomed its first guests. Located at the heart of CityCenter, ARIA is the centerpiece of this extraordinary urban resort destination. Its debut signifies the official grand opening of this city-within-a-city, following two weeks of celebrations for the reveals of Vdara Hotel & Spa, Mandarin Oriental, Las Vegas and Crystals retail and entertainment district. Featuring an unprecedented combination of striking architecture, sustainable design, high-end service and spectacular amenities, the stunning ARIA has dramatically altered the skyline of the world’s most famous boulevard and will forever change the perceptions of the Las Vegas Strip. “ARIA and CityCenter reflect a combination of innovation, energy and visionary design that we believe will reshape how the world views the destination resort experience and attract visitors from around the globe as a landmark of taste and style,” said Jim Murren, Chairman and CEO of MGM MIRAGE, which developed CityCenter in partnership with Infinity World Development Corp. Designed by the world-renowned firm Pelli Clarke Pelli, ARIA’s architectural expression reveals itself at every turn, from its two breathtaking curvilinear steel and glass towers to the clean use of natural elements including lush foliage, wood and stone. At 18 million square feet, CityCenter is the largest private sustainable development in the world, having received six LEED® Gold certifications for its buildings.At an early morning press conference yesterday, company executives and national dignitaries including the president, CEO and founding chairman of the U.S Green Building Council were on hand to pay tribute to CityCenter’s significant milestone in the arena of sustainable design, construction and operations. Among its sustainable distinctions, ARIA commissioned the first fleet of clean-fueled CNG stretch limousines. It also is the first resort on the Las Vegas Strip to generate its own electricity.Also part of yesterday’s opening events, senior executives from both MGM MIRAGE and Infinity World had the rare honor of remotely ringing the Closing Bell of the New York Stock Exchange, marking the project’s major contribution to the financial fortitude of Las Vegas. CityCenter is the single largest hiring effort in the country today, creating new jobs for approximately 12,000 people. Bobby Baldwin, president and CEO of CityCenter said, “This is an incredibly proud time in our company’s history. We believe this moment marks a turning point in the financial future of our community.”A grand opening invite-only gala capped the opening day’s activities, giving VIP guests an opportunity to sample ARIA’s impeccable hospitality, creative personalized attention and incredible array of amenities. Finally, at 11 p.m. fireworks filled the sky with brilliant bursts of color, reflected in ARIA’s curved glass curtain wall, as Las Vegas visitors and locals gathered below eager to enter the resort when the doors opened shortly following the dramatic aerial salute.Murren said, “CityCenter will become the benchmark by which all new developments will be measured, and it won’t be surpassed in scope and grandeur for decades.”